Do not litter. No photography. Keep off the grass.

Sternly worded prohibition signs are often used to remind us to follow certain norms or rules. However, the effectiveness of such signs is questionable, as can be seen in the case of littering. Coffee cups, plastic bags or cigarette butts – most people know that littering is bad for the environment. Yet, many people seem to mindlessly dispose of their trash by simply throwing it away on the streets or in nature. Here’s how social norms can help to explain littering behavior.

Littering – it’s terrible for the environment, most of us know that we shouldn’t do it, yet every year, tons of trash end up polluting our environment. Paradoxical, but we’ll talk about some possible reasons for this in just a moment.

Before I get all sciency, I would like to start of this post with a little story from my time as a university student. It was the year 2012, I had just moved from Germany to the Netherlands and I had an absolute blast at the introduction week held for all new first-year students. During the first night, there is always a “Grand Opening” party on the “Grote Markt”, a big city square. So there I was, little 19-year-old Doro, partying and enjoying herself with a beer in hand. After I had finished my cup of Dutch generic pilsener (you know the brand I’m talking about – the beer tastes terrible, but they’re good at marketing), I was left with my empty plastic cup standing in the middle of the crowd. Since there was no bin in sight and I didn’t want to risk losing my new group of friends, I just kept dancing away, empty beer cup in hand. I don’t remember how much time passed, but at some point, our Dutch “buddy” who showed us around during the week asked me why the hell I was still holding my cup in my hand. The conversation went something like this:

Dutch dude: “Doro, why do you keep holding onto your empty beer cup?”

Dutch dude: “Oh don’t worry, just throw it onto the ground, we all do it, they will clean it up afterwards!”

Doro: ”Nah, I don’t want to do that, you can’t just throw waste onto the ground!”

Well, what can I say, a short time later, my empty beer cup landed on the ground, which is the first and last time ever I have consciously littered (I grew up in a family, in which every single plastic bag is washed and reused until is falls apart, so that’s the level of environmental awareness I grew up with). Why did I end up littering? Because I was told, “it’s ok to do it”, “we all do it”. In other words, it’s a social norm, which brings me to the topic of today’s post – social norms and littering.

A quick impression of how much litter is left in parks and other places after partys – two examples from England and the Netherlands.

In a previous post on this blog, I have already talked about why we don’t always act in line with our intentions, which is partly due to much of our behavior being automatic, impulsive and guided by situational cues. Other factors that influence our everyday behavior include social norms, which are perhaps one of the strongest influences on our behavior.

There are two types of social norms: injunctive norms, which refer to the perception of what is approved or disapproved by others as well as descriptive norms, which refer to the perception of how people do in fact behave. Put differently, norms are the visible and invisible rules of conduct that provide us with an idea of how to act and provide order and predictability in society.

People learn about norms by observation, imitation, and general socialization. Interacting with others thereby provides direct input for our own thinking and doing. Not everyone complies with social norms though, which leaves those who witness such “norm-violating” behavior with the dilemma of how to respond to this. 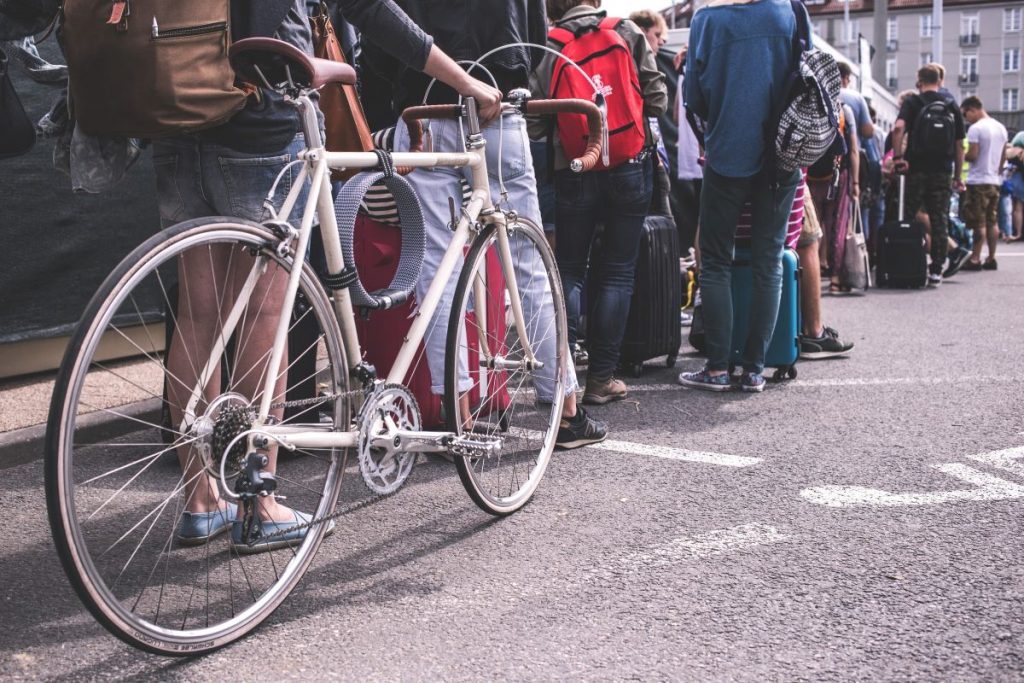 Social norms are the unwritten rules about unacceptable and acceptable behaviors
(such as standing in line) in a particular social group or situation.
Photo by freestocks on Pexels

So what happens if we observe others breaking a social norm? If we go back to the story that I told in the beginning, you might realize where I am going with this. In my case, I realized that others don’t follow the “do not litter” norm, and ended up throwing my beer cup on the ground, thereby violating the same norm. This not the whole picture though. Some people have suggested that observing people violate norms in general, can encourage other “rule-breaking” behavior too.

In the mid-1990´s, New York City introduced the so-called “Quality of life” campaign, aimed at fighting disorderly behavior and petty crime by removing signs of vandalism and cleaning the streets. The idea behind this campaign was the broken window theory by Wilson and Kelling. The theory posits that signs of disorder, such as broken windows or litter, bring about additional (other) types of disorder, such as petty crime or additional litter. Removing disorder was thought to take away the trigger of this behavior. Petty crime rates in New York City indeed dropped after the introduction of the campaign, and similar approaches were soon adopted in many places worldwide. Despite the success of these approaches, critical voices have raised that the theory lacked empirical support (i.e. information acquired by observation or experimentation), a research gap that a Dutch team of researchers aimed to close.

How social norms can both discourage and encourage littering

The psychologist Kees Keizer and his colleagues conducted several controlled field experiments to examine how observing norm violations influence people’s littering behavior. The experiments were conducted in an alley close to a shopping area in the city center of Groningen, the Netherlands, where many shoppers park their bicycles. The basic set-up of the studies all followed the same principle: noticeable flyers that read “We wish everyone happy holidays” were attached to the handlebars of the bicycles parked in the alley. In order to easily use the handlebar, these flyers had to be removed by the participants of the study (people who came to collect their bicycles). The researchers examined under which circumstances the people littered by throwing the flyer on the ground or attaching it to another bicycle. Since there was no trash can present in the alley, not littering meant taking the flyer with them. In my opinion the results of the study are fascinating, and perfectly illustrate how social norms work. Let’s have a look at some of the results below.

In their first study, Keizer and his colleagues examined the basic proposition of the broken window theory, namely whether people are more likely to litter in an area that is already visibly littered. The theory behind it? If people see litter on the streets, this indicates that other people do not follow the social norm of “do not litter”, making it seem as if this is an acceptable behavior. The study results confirmed this speculation – while 53% of the participants did not litter when the alley was clean of other litter, only 39% of the participants did not litter when the area was littered with some soda cans, plastic bags, candy wrappers and flyers.

Next, the researchers examined what would happen if they hung up an anti-litter prohibition sign in the already littered alley, which is an approach commonly taken to discourage people. Under these circumstances, only 28% of the participants took the flyer with them, presenting a significant drop from the 39% of people who did not litter when no sign was present. Why that happens? Seeing litter in an area despite a sign telling people not to do so, tells people that “others don’t follow the rule that’s on the sign, so violating this rule seems acceptable”. Hence, seeing a prohibition sign in a place that is still visibly littered, made people even less likely to conform to the anti-litter norm.

In their next series of experiments, the researchers examined whether violations of other norms unrelated to littering would also affect littering behavior. In order to do so, graffiti was sprayed onto the walls of the alley.

When no litter, but graffiti was present, only 38% of participants did not litter, compared to 53% in the baseline condition when the alley was clean. When a “no graffiti” prohibition sign was added to the wall, this number even dropped to 28%. Hence, when the participants noticed other people seemingly violating the no-graffiti norm despite the prohibition sign, they were also less likely to conform to other social norms, namely not to litter.

When adhered to, prohibition signs signaling a social norm can help

So do prohibition signs have any positive impact at all? When removing the graffiti from the walls while leaving the anti-graffiti sign in the alley, 68% of the participants conformed to the anti-litter norm. In comparison to the baseline condition (no litter, no graffiti, no prohibition sign), this is a significant increase, which suggests that if people observe others seemingly respecting the norms and rules in place, people are more likely to conform to other norms as well.

Where do we go from here?

The moral of the research? Rule-breaking behavior seems to be contagious. Therefore, removing evidence of such behavior, such as litter on the streets, needs to be a priority for policymakers, especially in areas where signs directly forbid these behaviors. Additionally, prohibition signs should not be placed in areas where rules are not enforced, as this can have exactly the opposite effect than intended.

How to encourage people to eat less meat

Want new things? Here is why we are driven to buy more and more